For the pre-selection, we were able to win five concertmasters and section leaders of our partner orchestra, the NDR Radiophilharmonie, to form the jury. Due to their many years of experience with first-class international conductors and soloists, their individual artistic activities as chamber musicians and soloists, and their independence from university and competition activities, they were particularly predestined for the task. In mid-May 2021, they selected 36 participants in the JJV 2021 who were musically and instrumentally enthusiastic and in whom they saw potential finalists for "their" orchestra round with the NDR Radiophilharmonie. In 1999 he founded the Hyperion Trio, with which he won the International Johannes Brahms Competition in 2001. Since then there has been extensive concert activity with this ensemble, with whom he founded the festival "Klanginsel Helgoland" in 2016. The aim of the festival - and of his chamber music work in general - is to juxtapose well-known masterpieces with rarely performed works in order to trace biographical or music-historical contexts. In many cases, this work has led to first recordings of the unknown works (such as in the CD productions Joseph Marx, Julius Röntgen, Robert Kahn, Felix Woyrsch and Rubin Goldmark). These recordings for the labels CPO and Thorofon/Bella Musica are regularly highly praised by the specialist press. In 2020 a complete recording of the works for piano trio by Carl Reinecke will be released (including his version for piano trio of the Triple Concerto op. 56 by Ludwig van Beethoven).

Since 2008 Oliver Kipp is tutor for violin and chamber music of the "European Union Youth Orchestra". He has a teaching position at the Hanover University of Music, Media and Drama. He also works regularly with the academicians of the NDR Radiophilharmonie Orchestra. He is a demanded jury member at international competitions, lecturer at master classes and member of the "Audition Panel" of the "European Union Youth Orchestra". The violinist Anna Lewis comes from the vicinity of Moscow, where she also received her first training at the Tchaikovsky Conservatory with Prof. Fedor Druschinjn. She has been living in Germany since 1992, first studying in Freiburg with Prof. Kim Kashkashian, then moving on to Frankfurt to study with Prof. Tabea Zimmermann, where she graduated with the degree of "concert soloist".

She has performed as a soloist with various orchestras. Together with Christian Tetzlaff and the Deutsche Kammerphilharmonie Bremen she performed Mozart's "Sinfonia Concertante", Hindemith's "Der Schwanendreher" with the Gewandhausorchester and Berlioz' "Harold in Italien" with the Orchestre national d'Île-de-France. Kathrin Rabus studied in Basel (Switzerland) with Sandor Zöldy, in Tel Aviv (Israel) with Pjotr Bondarenko and in New York with the renowned violin pedagogue Dorothy DeLay and had masterclasses with Henryk Szeryng, Nathan Milstein and Gidon Kremer. An important milestone in her international career was winning the German Younger Soloists Podium Award in 1979 as well as the International Tibor Varga Violin Competition in 1987.
Kathrin Rabus is First Concertmaster of the NDR Radio Philharmonic Orchestra since 1988 – as first woman in such a position in a German Radio Orchestra. She is often invited to international festivals , such as Schleswig – Holstein Musikfestival, the Rheingau Musikfestival, to Lockenhaus (Austria) , Kuhmo (Finland), Kurashiki (Japan) and Jerusalem Chamber Music Festival.

She has made numerous CD recordings, i. e. as chamber music partner of Gidon Kremer (Philips: Haydn, “The Seven Last Words“ and Schnittke: Piano Quintett) and was honoured in 1999 with the famous ECHO Classic Prize in the category “Chamber Music“. The same year she became violinist of the Kandinsky String Trio.
She received special inspiration from Andras Schiff, with whom she plays regularly in his ensemble “Capella Andrea Barca“. As soloist she performed Bartok 2nd Violin Concerto under Michael Gielen, Schumann Violin Concerto under Bernhard Klee and Schumann Fantasie under Heinz Holliger . She has a special interest in contemporary music : she played e.g. the world premiere “Silenzio “ by Sofia Gubaidulina (recorded for Naxos), as well as the first recording of the Violin Concerto by Daniel Schnyder under Kristjan Järvi (Enja Records).

Kathrin Rabus is Primaria of the “ Arte Ensemble“, a chamber music group consisting of members of the NDR Radio Philharmonic Orchestra, that appears with amongst others Dominique Horwitz and Herbert Feuerstein. 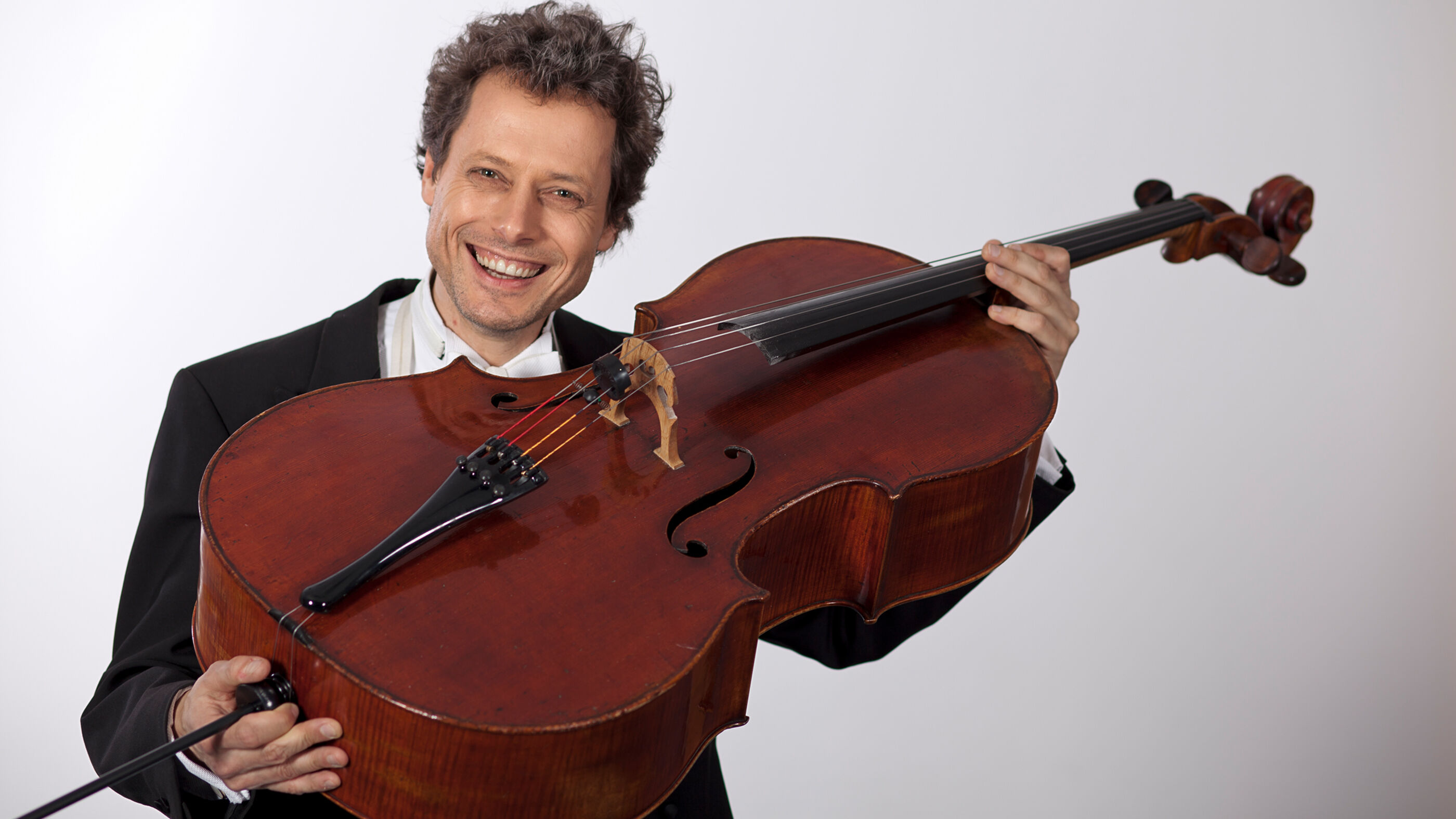 Nikolai Schneider first received his cellist training as a young student under Friedrich Jürgen Sellheim at the Hanover University of Music, Drama and Media. The formative teachers during his studies were Heinrich Schiff in Basel and David Geringas in Lübeck. He completed his artistic education with external chamber music studies with Konrad Grahe at the Folkwanghochschule in Essen and master classes with Walter Levin, Hatto Beyerle, Boris Pergamenschikow, Frans Helmerson, Maurice Gendron and André Navarra.

Since 1996 Nikolai Schneider has been first coordinated solo cellist of the NDR Radiophilharmonie Orchestra.

In addition to his activities in the orchestra, chamber music is not the only thing that is close to his heart. Regular concerts in varying instrumentations from duo to (cello) octet, appearances as soloist with the NDR Radiophilharmonie and other orchestras, but also educational work, among others in the Joseph Joachim Academy of the NDR, complement and enrich his artistic tasks in the NDR Radiophilharmonie Orchestra. Music means everything to me. It’s a part of me, my source of joy and strength.

As a soloist, she has toured Germany, Poland, and Italy, performing with numerous renowned ensembles, among them the Baden-Baden Philharmonie,  the Staatskapelle Weimar, the Rzeszow Philharmonic Orchestra (Poland), the Chamber Orchestra Mannheim, and the Stuttgart Chamber Orchestra under the direction of von Dennis Russell Davies. As a Jürgen-Ponto scholarship recipient (2004-2007), she regularly took part in international master classes, being instructed by renowned musicians and pedagogues such as Wolfgang Marschner, Kurt Masur, and Herman Krebbers. She performed at various festivals, such as the Moritzburg Festival.

Between 2008 and 2012, Friederike Starkloff studied at the Freiburg Conservatory with Rainer Kussmaul, followed by studies at the Hanns Eisler School of Music in Berlin with Antje Weithaas, whom she is assisting at the moment. In 2005, Friederike Starkloff became concertmistress of the NDR Radiophilharmonie Hannover. As a sought-after concertmistress, she has been performing with the Stuttgart Chamber Orchestra, the Deutsches Symphonie-Orchester Berlin, the NDR Elbphilharmonie-Orchester, and the BBC Symphony Orchestra.

Until 2015, she played a violin by J. B. Guadagnini (a loan of the Baden-Württemberg state collection); today she plays a violin by Julia Maria Pasch from 2014.