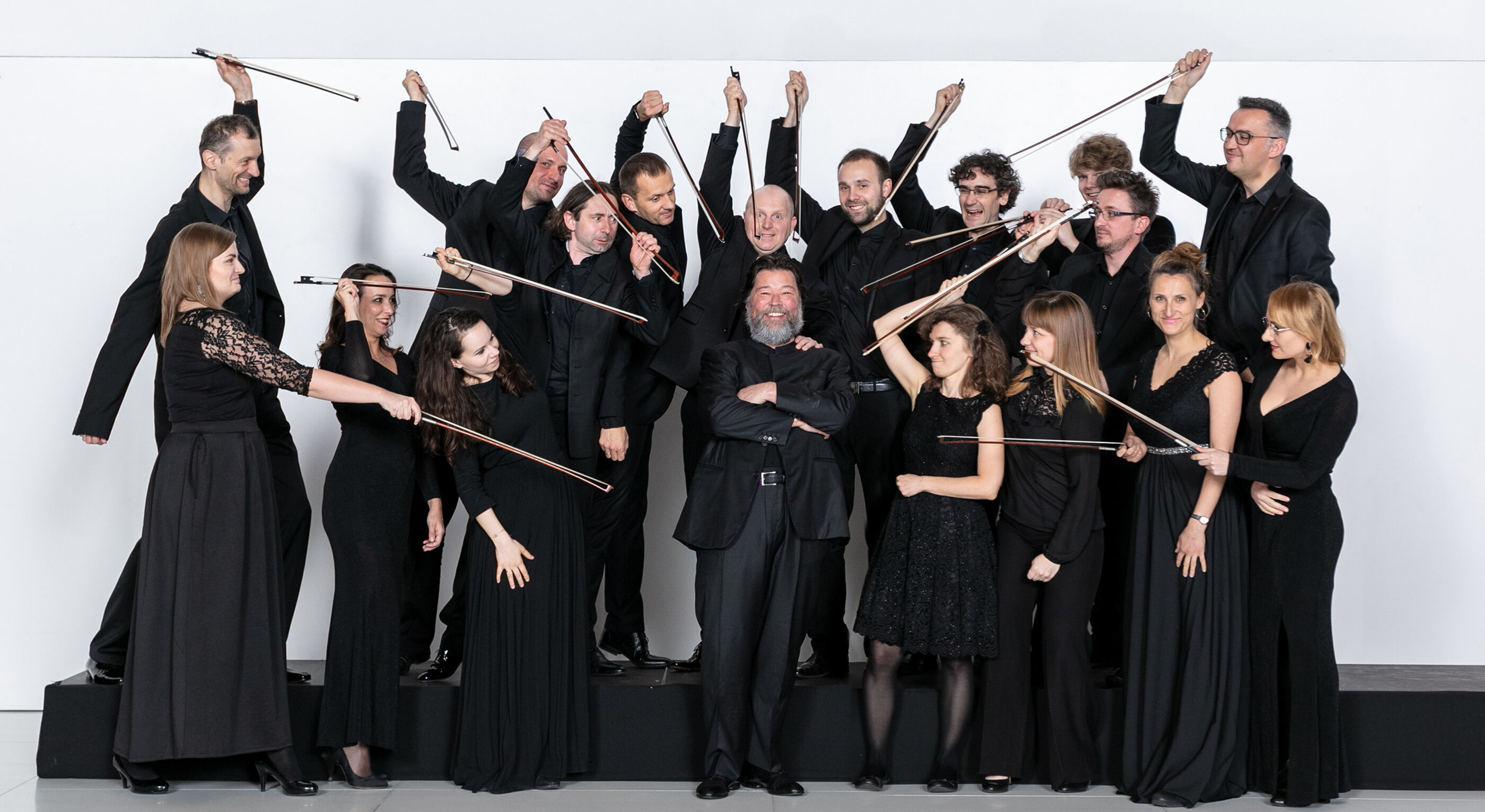 The four decades of its activities, the NFM Leopoldinum Orchestra has achieved a position of renown and experienced various approaches to leading the orchestra as well as elaborating their own approach to music, combining emotiveness of sound with transparency of texture and clarity of parts. It is to these features of Leopoldinum’s playing that critics draw our attention, valuing its productions also for the musicians’ conspicuous engagement with what is performed.

For several years now, the ensemble’s priority has been presenting music of outstanding 20th-century composers, music somewhat overlooked in the process of shaping – not unfrequently by chance – repertoire canons. Thus Leopoldinum reveals to their listeners works of the highest order, but remaining beyond the concert mainstream and at the same time astonishing in their quality and genuine musicianship.

At the beginning of the 21st century, under the leadership Ernst Kovacic the orchestra found its own, new profile. Drawing from its new director’s knowledge and experience (Kovacic is an excellent Austrian violinist recognized as a specialist in 20th-century and contemporary repertoire), the orchestra was able to promptly embark on exploring the niches of 20th-century music with a level of professionalism hardly attainable by other ensembles.

Since 2014 until 2017 the ensemble was directed by Hartmut Rohde, a violist and professor of the Universität der Künste in Berlin. Rohde has focused on stylistic interpretations of the early classical up to the late romantic period. The new artistic director of Leopoldinum is the great violinist and conductor Joseph Swensen, who has extended Leopoldinum’s repertoire to encompass works from Beethoven to new music.

Leopoldinum has performed in Europe’s major venues: Barbican Centre, Philharmonie, Konzerthaus and Schauspielhaus in Berlin, Konzerthaus in Vienna, Tivolis Koncertsal in Copenhagen, Teatro Victoria Eugenia in San Sebastián and others, as well as during the most important European festivals (Casals Festival in Prado, Muziekfestival West- Brabant in Holland, Bodenseefestival and Weilburger Schlosskonzerte in Germany, Echternach in Luxemburg, Festival de musique du Périgord Noir in France, Estoril in Portugal, Flanders Festival, Europalia.europa in Belgium, and, last but not least, Wratislavia Cantans and Musica Polonica Nova in Wrocław, Poland).

The results of this mission are the subsequent CD recordings, produced in recent years, and among them public attention has been drawn particularly to e.g. CDs with works by Ernst Krenek (2 albums released by Capriccio and Toccata Classics), Kunst der Fuge (CD Accord), Leoš Janáček (DUX), Berg by Arrangement (Toccata Classics) – hailed by The Sunday Times as one of the best CDs of the year, Made in Poland with works by Grażyna Bacewicz, Karol Szymanowski, Henryk Mikołaj Górecki (CD Accord, won Fryderyk Award 2018), CD with works by Simon Laks and Philipp Jarnach (cpo), CD with Gośka Isphording and works by Hanna Kulenty (Music 4 DUX), CD Supernova with Atom String Quartet (CD Accord, won Fryderyk Award 2019).

The National Forum of Music in Wrocław is a state-of-the-art concert venue, including, among others, four concert halls, with the main hall seating 1800 people. The four auditoriums can boast of excellent acoustics. The NFM is also a progressive performing arts organisation whose aim is to propagate active participation in cultural life among Wrocław citizens and visitors to the city. The intensive educational and promotional activities have resulted in eight festivals being presented by the NFM (including the Andrzej Markowski International Festival Wratislavia Cantans), each year hosting the most outstanding Polish and international artists. The venue itself has become a meeting place for various artistic genres, not only musical. The NFM is home to twelve resident ensembles: NFM Wrocław Philharmonic, NFM Leopoldinum Orchestra, Wrocław Baroque Orchestra, NFM Choir, NFM Boys’ Choir, Lutosławski Quartet, LutosAir Quintet, NFM Ensemble, NFM Leopoldinum String Trio, Polish Cello Quartet, and Wrocław Baroque Ensemble. The National Forum of Music’s recording catalogue continues to grow, and each year sees the release of several new CDs with versatile repertoire. A gamut of educational activities is addressed to all age groups. Andrzej Kosendiak, now serving as NFM Director, is one of the founding fathers of the NFM.